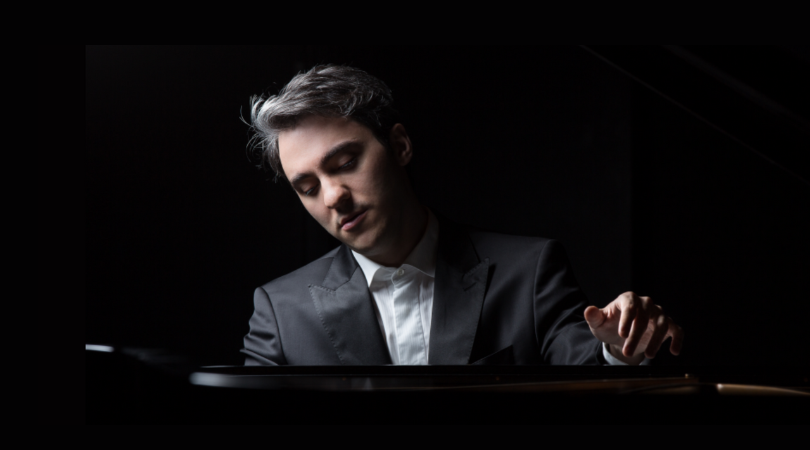 Italian-Slovenian born, Alexander Gadjiev grew up in a musical family with both his parents well-known piano teachers and musicians. Studying piano with his father, Alexander made his concert debut at the age of nine, giving his first solo recital a year later.

Alexander received his Master’s degree at the Mozarteum of Salzburg, under the guidance of Pavel Gililov. Following his Master’s degree he took his Konzertexamen in Berlin under Eldar Nebolsin, and has performed in the major concert halls of Paris, Venice, Moscow and at esteemed piano festivals around the world.

In demand as a soloist with orchestras, and as a recitalist, Alexander has also performed in the Salle Gaveau in Paris, the Great Hall of Ljubljana’s Philharmonie, La Fenice in Venice and the Tchaikovsky Moscow State Conservatory.

Alexander is also the First Prize winner of the prestigious and internationally renowned Sydney International Piano Competition (The Sydney). Awarded by an international jury, Gadjiev stole the show in this year’s competition, receiving half of all the prizes available to the finalists – a first for any competitor in The Sydney’s 44 year history.

Acclaimed by SBS as “one of the most promising pianists of the moment” following his win, The Sydney is very proud to present Gadjiev as their newest laureate. The bar is set high for Gadjiev, with other laureates making their significant and distinctive impacts on Australian audiences. The star quality Gadjiev has already shown gives presenting venues just a glimpse of the shimmering experience that lies ahead for Australian audiences in spring 2022.

Simon Gardner’s Classic Rock Legends of the 80s and 90s

The Boy Who Talked to Dogs

SOLD OUT – Afrikaans Is Lekker