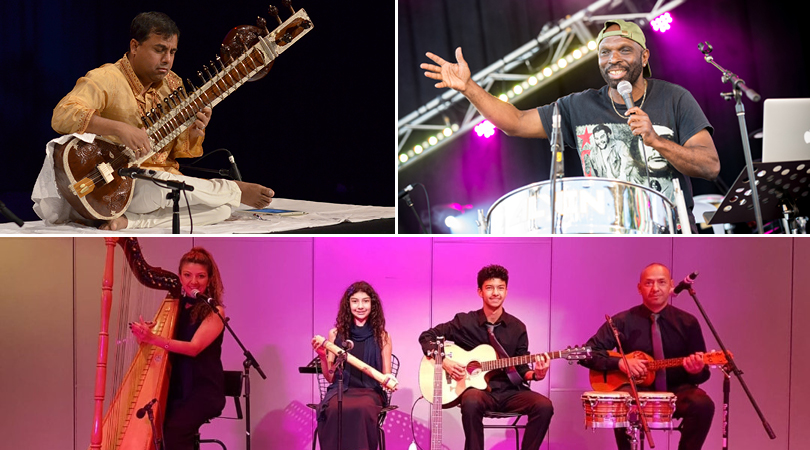 Alvin Rostant hails from Trinidad and Tobago so you know his performance is authentically all Caribbean! Renowned for his pan skills, smooth vocals and compelling stage presence Alvin Rostant is one of a kind. Alvin has the uncanny skill of being able to read a crowd, helping to always deliver exceptional performances, grabbing the audience’s attention from the very first song.

A family band, Cachicamo Latin Harp represents the essence of Latin American music with Spanish, Portuguese, African and Native backgrounds. Sandra was awarded “The Gold Lira” by The Association of Authors and Compositions of Colombia (SAYCO). She has introduced her own style and way of making music with the Harp.

Saikat Bhattacharya has been playing the Sitar for over twenty years. Playing the sitar is his passion and devotion, beginning in the early nineties under the supervision of his Guru Pandit Manilal Nag of Calcutta, in India. Pandit Manilal Nag comes from the Vishnupur Gharana, which is the one and only school of music that originated in Bengal with its roots, embedded in the “Senia Gharana” of Delhi. Since coming to Australia, he has regularly performed in various programs like the Queensland Multicultural Music Festival and the Woodford Folk Festival.

Live music by talented local artists on the outdoor stage. Food trucks and markets from 5pm.