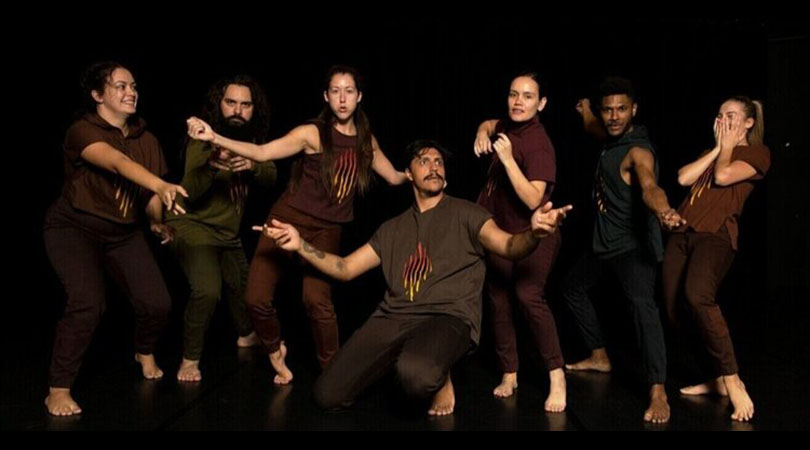 Through the beating of a drum, bodies thrash through white noise to continue a 250-year old conversation. Yet still no action. Still no resolution. SILENCE pulls the Treaty conversation out from under the rug, slams it back on the table and invites you to make it a talking point!

Choreographed by Thomas E.S. Kelly (Minjungbal-Yugambeh, Wiradjuri and Ni-Vanuatu man), SILENCE is an entry point to Treaty and the complex political environment we find ourselves in. It is a powerful dance performance featuring seven performers on a minimalist set with evocative lighting. The complex musical score, punctuated by dynamic live percussion, explores past, present, alternate realities and dreamscapes. The entire stage is slowly engulfed in dirt, representing the worldwide call for the return of Indigenous lands

SILENCE is about the space in between. The conversations not being heard and the responses that are muted. Through the beating of a drum, bodies thrash through frequencies to uncover what lies in the SILENCE.

SILENCE can give stories and strength, yet SILENCE can wound. There’s SILENCE between the stars as the Emu travels across the night sky, or the dancer’s energy when they hit the cut between rhythms. It’s also the deafening silence under white noise. The same questions echoed through generations.

We have marched across Country. We have had promises made and promises broken. We have drafted our own, and we are still the only sovereign peoples without one. In SILENCE we pull it from under the rug and slam it back on the table. Let’s listen to the SILENCE and design an agreement to heal us, our land and the wound of this nation. Because the conversation about a TREATY will never be silenced.

The Boy Who Talked to Dogs